Whenever a consumer enters a department store selling groceries, the way the shelves are sorted and arranged will have been predefined by the store owner. This order might be useful in some cases (where the tooth brush is next to the tooth paste), but in other cases it won't be. If one consumer is searching for protein-rich food, the ideal place to search would be a shelf, with food that is rich of protein. Imagine another consumer, who was searching for the same thing a day before. Imagine she would have taken the effort to go around the store, collect all matching food products and put it on one shelf. Wouldn't this be useful?

In a brick and mortar store such a reordering is impossible for the lack of space alone. But in a digital store, it would not be a shelf, but just another category in the category tree and reordering doesn't require lifting heavy things. With NKE the complexity of creating such categories is disguised as navigation and reduced to selecting examples.

A user is entering the site http://amazon.com with the intention to find a selection “2.5 inch external hard drive with 500 GB”. She might proceed as follows:

Based on this input, an algorithm is able to produce a much preciser recommendation than by analyzing click behavior, because the user is now actually able to directly model the search enquiry by stating examples. In case the recommendation matches the conception of the user, she is able to save it and give it a name, i.e. “2.5'' external hard drives with 500 GB”. This so created category is now available to be incorporated into Amazons hierarchy and will be shown to the next user with the same search intention.

If the Web 3.0 is about “structured data created by a massive user base” then it might mean on the one hand that facts are collected, but on the other hand it might as well mean that users will be able to structure data by navigating, searching and using it. Thus a reciprocal relation is formed between the information need of users and the structure gain through the created taxonomy.

Vision (defining and elaborating the concept of NKE)

Most of the text is taken from our yet unpublished WWW 2011 submission.

Navigational Knowledge Engineering is the manifestation of labeled examples by interpreting user navigation, combined with the active correction and refinement of these examples by the user to create an ontology of user interests through supervised active machine learning.

The NKE methodology consists of three distinct yet interrelated steps:

The vision of NKE is to enable low-cost knowledge engineering on the largest possible scale – the Web. The most fundamental consequence of the paradigm is that value is added to data by just navigating and using it. A reciprocal relation is formed between the information need of users and the information gain through the created taxonomy. Although structured data is becoming widely available, no other methodology – to the best of our knowledge (Nov 2010) – is currently able to scale up and provide light-weight knowledge engineering for a massive user base. Using NKE, data providers can publish flat data on the Web without creating any structure upfront, but rather observe how structure is created on the fly by interested users, who navigate the knowledge base and at the same time also benefit from using it. As an ontology is created by user navigation, it can be used directly to improve further navigation. For other purposes the ontology might not be used directly, but it can be seen as raw material, that needs to be refined and curated by an ontology expert, a system admin or moderator, employed by the data provider. Two users on Amazon.com searching for 2.5 inch external hard drives might save two intentionally different concepts with a similar extension: “hard drives without an extra power cord” and “hard drives measuring 2.5 inches”. An easy improvement by a knowledge curator would be to define equivalence between these concepts (e.g. via an owl:equivalentClass axiom). The knowledge curator could also review the user-generated ontology in regular intervals and select good concepts to be included into a domain ontology.

Prototype (a description of our prototypical implementation)

The methodology is demonstrated with HANNE, a Semantic Web system which enables users and domain experts to navigate over knowledge bases by selecting examples. From these examples, formal OWL class expressions are created and refined by a scalable Iterative Learning approach. When saved by users, these class expressions form an expressive OWL ontology, which can be exploited in numerous ways: as navigation suggestions, as a hierarchy for browsing and as input for a team of ontology editors. In particular, we developed an NKE tool named HANNE (Holistic Application for Navigational KNowledge Engineering), which implements the NKE method. In this tool, users can search for resources and mark them as relevant (+) and irrelevant (-). Machine learning techniques use this to explore the underlying concept a user is looking for. The demo is available at http://hanne.aksw.org, the source code can be downloaded from the Google code project and a screenshot is shown below:

NKE is a methodology, which can be implemented with existing technology and on integrated easily with existing solutions. We will explain the three steps necessary to get a working NKE system and then show some Mockups of how existing portals can be upgraded with NKE. Please tell us, if you find an application, which employs NKE.

That's it. As soon as users start to save the learned concepts and give them names, an ontology of user interests will start growing. Now it is your choice what to do. Here are three suggestions: 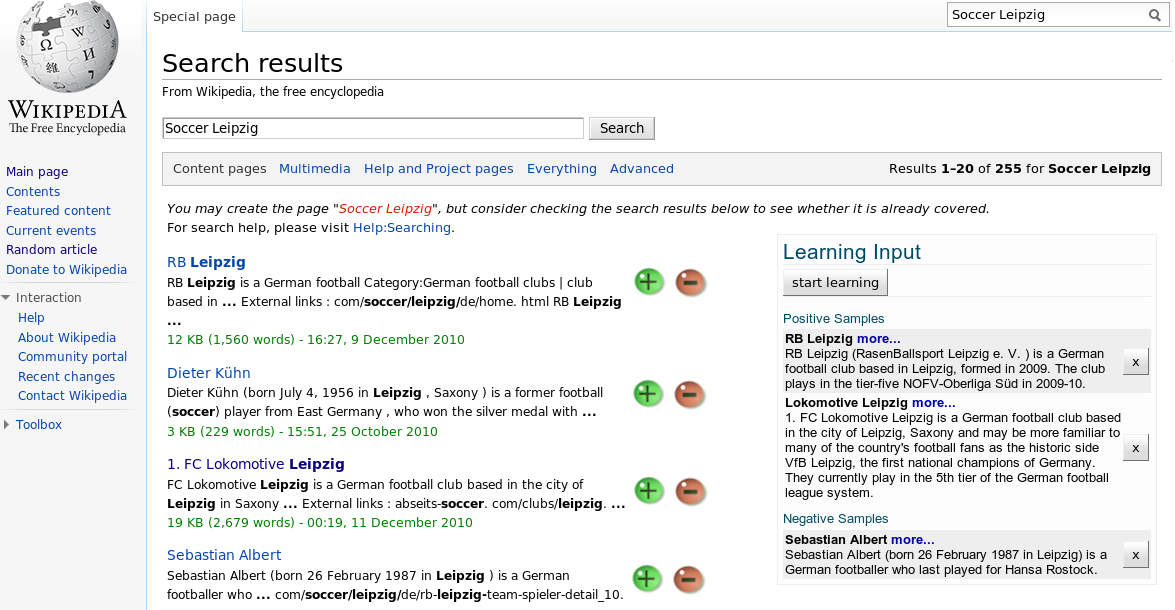 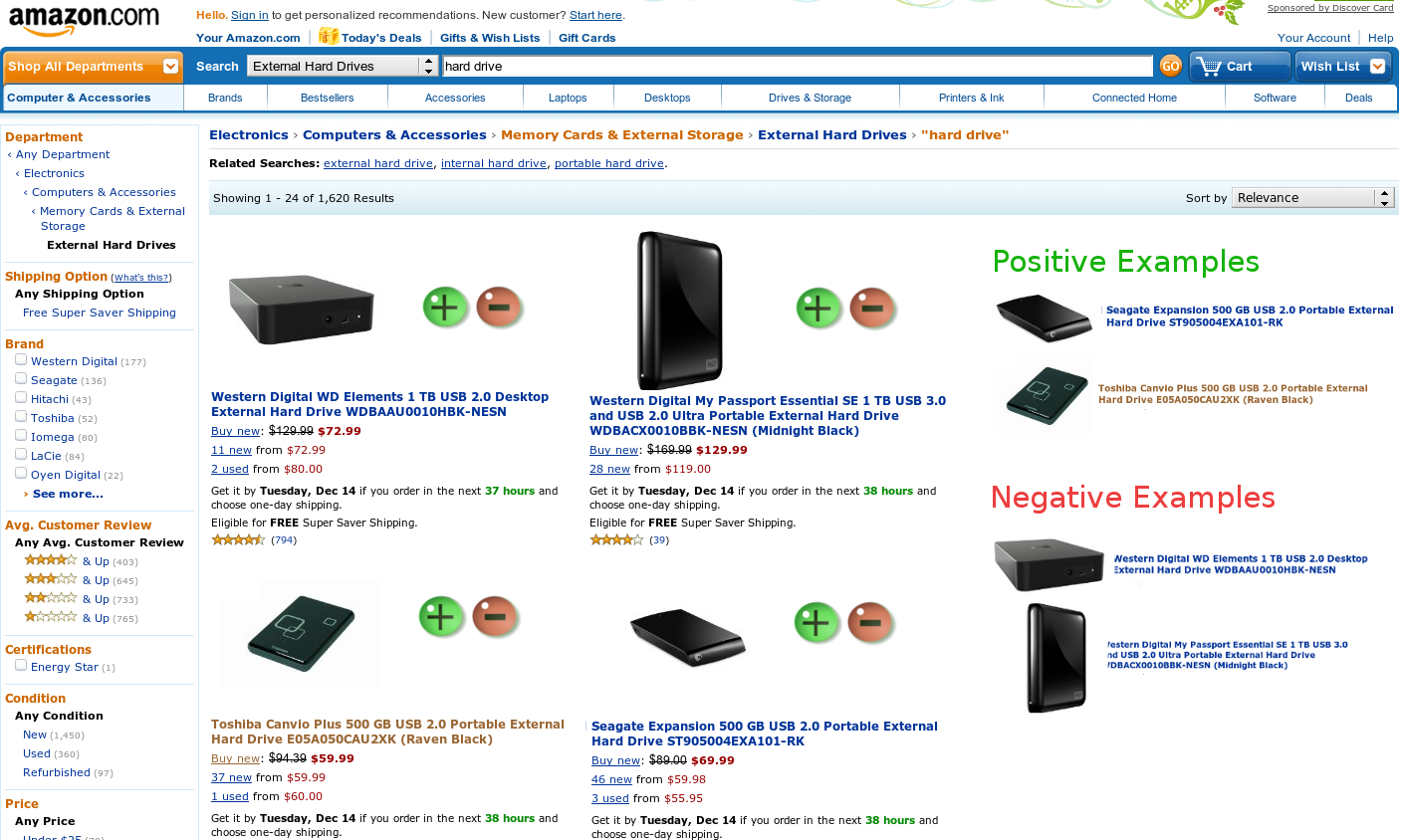 In the face of continuously changing contextual conditions and ubiquitous disruptive crisis events, the concept of resilience refers to some of the most urgent, challenging, and interesting issues of nowadays society. Read more about "International Workshop on Data-driven Resilience Research 2022"

Dear all, We are proud to announce that we will organize an online tutorial at the Web Conference on 25th of April 2022. A particular focus will be put on the DBpedia Infrastructure, i.e. Read more about "DBpedia Tutorial @ The Web Conference 2022"